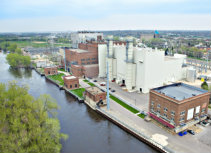 Built in 1911, the original coal-powered station was the oldest in the Xcel Energy system. Although construction crews used primitive tools and horse-drawn equipment to build the plant, Unit 1 was up and running within 18 weeks after construction began. As Minneapolis grew, so did the Riverside plant. By 1966, Riverside had eight operating units and a net capability of 512 megawatts.

The original plant was replaced with a new natural gas fired facility starting in 2006 as part of our Metro Emissions Reduction Project to significantly reduce air emissions and increase electricity production. The coal-fired plant was retired as the new combined cycle facility came on line in April 2009.

The conversion of Riverside from coal to natural gas significantly reduces all air emissions from the plant – particulates by about 86 percent, nitrogen oxide by 97 percent, and sulfur dioxide and mercury emissions by almost 100 percent.

Just offshore from Riverside on an island in the Mississippi River a few yards from the plant is a rookery of herons that relocated to the island after their previous home upriver was destroyed in a devastating tornado in May 2011. Our Bird Cam website is focused on the rookery during the nesting season.

With single-family homes only a few yards away, Riverside is physically closer to its residential neighbors than any of our other generating plants. And Riverside employees have taken an active part in the northeast Minneapolis community. Employees deliver Meals on Wheels in the neighborhood and support United Way. They also volunteer at community events, such as Art-a-Whirl and the Northeast Parade, and serve on the board of directors for the Northeast Minneapolis Chamber of Commerce. In addition, the plant maintains a close relationship with the Marshall Terrace neighborhood and supports East Side Neighborhood Service, Inc., an organization that has served the northeast area for many years.

Have your home checked for leaky ducts, drafts around doors and windows, fireplace dampers, and other places where air might escape.