The plan calls for us to:

The entire effort is expected cost about $1 billion and is estimated to have an average annual rate impact over the next 10 years of approximately 2 percent. We expect to reduce nitrogen oxides by about 86 percent, sulfur dioxide emissions by 83 percent, and mercury emissions by 82 percent from the plants included in the plan. The project will contribute to a projected system-wide reduction in carbon dioxide emissions since 2005 of 35 percent by 2020.

The University of Colorado Leeds School of Business forecasts the project will have a total economic impact of about $590 million on the state of Colorado between 2010 and 2026, resulting in about 1,500 jobs at the peak of construction. 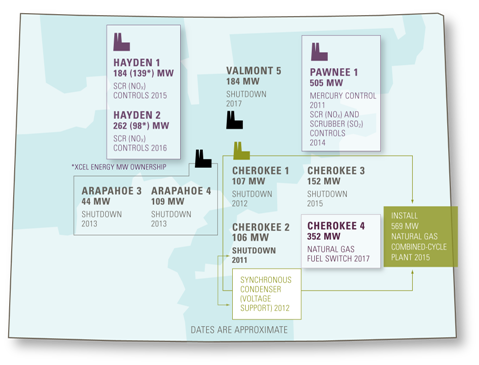 We worked with a coalition of policymakers and legislators to support Colorado's Clean Air-Clean Jobs Act. The legislation was enacted in spring of 2010 and required regulated utilities, such as Xcel Energy, to work to reduce emissions from coal-fueled power plants.

It was prompted in part by the Denver metro area’s non-compliance with several pending air quality mandates. Without the legislation, the U.S. Environmental Protection Agency (EPA) likely would have mandated a compliance program for the state of Colorado in early 2011.

Under the act, we were required to propose a multi-year plan to reduce emissions of nitrogen oxides by 70 to 80 percent or greater from 900 megawatts of coal-fueled generation by 2018 and meet “reasonably foreseeable” environmental requirements.

In meeting the requirements of the legislation, our objective was to develop and advocate for potential emissions reduction plans that would provide clean, reliable power without burdening customers with enormous costs. We studied hundreds of options and proposed multiple scenarios for the Colorado Public Utilities Commission to decide the best option.

After reviewing thousands of documents, conducting weeks of hearings and listening to the more than 30 parties that participated in the process, the commission selected a plan. We believe the approved plan: