Partnering with solar developers and researchers

We are working with the solar industry and others on initiatives to advance solar technologies and their application. Our interest is in furthering technologies that will ultimately benefit you-our customers.

We are the original founding member, host utility and a development partner at the Solar Technology Acceleration Center (SolarTAC) (external link), the largest outdoor solar testing facility in the United States located in Aurora, Colo. Together, the solar industry and utility users are working at SolarTAC to test, validate and demonstrate advanced solar technologies under actual field conditions.

As a major user of solar energy, our goal is to ensure that the technologies we deploy on behalf of customers are the most reliable and cost effective. SolarTAC is helping achieve results for us. SunEdison has fine-tuned solar technologies at SolarTAC that today are producing more cost-effective, reliable generation as part of large, universal solar power plants serving our customers in Colorado and New Mexico. Other developers have used the testing opportunity at SolarTAC to make adjustments in their technologies for cold weather conditions before installing the equipment in our service area.

SolarTAC also provides us with the unique opportunity to test grid-management solutions in a real-world environment—separate from our system that serves customers. As more solar arrays connect to our electricity grid, the variability of solar energy due to clouds and other factors can lead to voltage fluctuations and grid-management concerns.

By testing two different battery storage projects at SolarTAC, we have increased our knowledge of how batteries respond to intermittent solar generation and how battery chemistries perform over time, and what energy storage systems offer now and where they need to be tomorrow.

In addition to advancing solar technologies, SolarTAC also generates power for customers with several solar installations operating at SolarTAC connected to our system.

Our Innovative Clean Technology program in Colorado enables the testing of emerging energy technologies that promise lower greenhouse gas emissions and other environmental benefits. Since the Colorado Public Utilities Commission approved the program in 2009, it has funded a limited number of projects, giving us the ability to test new technologies and evaluate their cost, reliability and environmental performance on a small, demonstration scale before determining whether to deploy them more widely for customers. Past Innovative Clean Technology projects include the Colorado Integrated Solar project and community energy storage at SolarTAC.

Learn more about our current project (PDF) to test battery efficiency and reliability with Panasonic and with Denver’s Stapleton neighborhood, which has a large number of private rooftop solar installations. 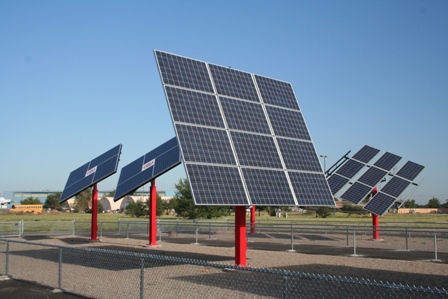 We support solar energy education for customers and schools in New Mexico through a special community program. Xcel Energy owns four photovoltaic systems located on partner sites in eastern and southeastern New Mexico. The installations are available to help teachers with energy curriculum specifically developed for New Mexico classrooms. Students, as well as the general public, can access live and historical data to measure ambient temperatures, wind speed and levels of solar production at the sites.

Southwestern Public Service (the Company) will solicit competitive bids for two solar systems of less than 1 MW in capacity through the 2017 NM Solar*Connect Community Request for Proposal (RFP). Up to 1.98 MW is available.

We tested the first-of-its-kind hybrid solar-coal project in 2010, using parabolic-trough solar technology integrated with a coal-fueled power plant. The project was located at our Cameo Generating Plant near Grand Junction, Colo., which has since been retired and decommissioned.

Overall, the solar-integration project was designed to:

The test results were positive. While only a small, pilot-scale test, the solar energy produced by the project increased plant efficiency by more than 1 percent and replaced more than 260 tons of coal during the course of the test. It also reduced the plant’s air emissions by about 600 tons of carbon dioxide, 2,000 pounds of nitrogen oxides and 5,400 pounds of sulfur dioxide.

Learn more about the project by reading the final report (PDF).