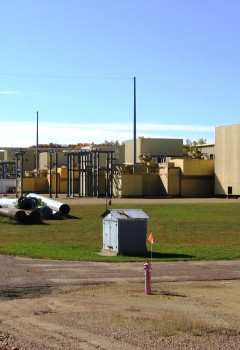 Construction began on the Wheaton Plant on May 26, 1972. The plant was placed in service on May 6, 1973, to be used as a backup generating facility. The six simple-cycle gas turbine generators produce electricity by operating independently or as a combined system. These turbines work on the same principle as a jet engine, except they are designed for industrial applications. A unit can be started and placed in synchronous operation at a rotating speed of 3,600 RPM in 12 to 22 minutes, depending on the unit. The units generate at a voltage of 13.8 KV, which is transformed to 161 KV for connection to the 161 KV transmission system grid at the Wheaton Substation. These 161 kV lines are connected to Xcel Energy substations located in Eau Claire, Menomonie, Wissota (at the Wissota Hydroelectric Plant) and Elk Mound. In 1997, Units 2 and 4 were converted to burn natural gas as well as fuel oil. In 2000, Units 1 and 3 three were also converted to dual fuel systems. In 1999, an inlet fogging system was added to all six units.

Silencers have been installed on each unit to help reduce the noise levels when all the turbines are in operation. The use of natural gas instead of #2 fuel helps reduce emissions.

Tours are provided to the general public on a frequent basis.