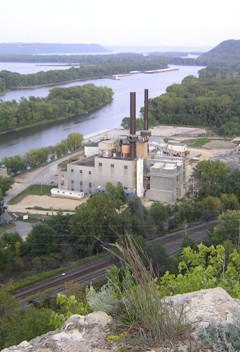 The Red Wing Generating Plant proves that a combination of ingenuity and technical advances can offer innovative solutions for today’s waste disposal problem. Built in the 1940s as a coal-fired generating facility, Red Wing’s two units were converted in 1986 to burn refuse-derived fuel. RDF is a fluffy, burnable fuel produced from municipal solid waste. The processed municipal solid waste provides a low-cost fuel alternative to generate electricity and reduces the amount of material going to landfills.

The Red Wing plant is located amidst the scenic Mississippi River bluffs of southeastern Minnesota, just below Barn Bluff, a popular hiking area.

The plant employs a combination duct scrubber with a baghouse to effectively meet emissions requirements from incinerating refuse-derived fuel. The scrubber treats flue gas with a water spray and dry lime, while the baghouse traps particulate by forcing gas streams through microfiber filter bags.

Red Wing staff supports a variety of local civic activities and many employees are involved in youth athletic programs. The plant is a sponsor with the Red Wing YMCA in a youth summer activity called “What’s in the River?”.