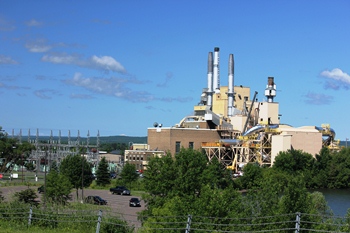 Bay Front got its start in 1916, when Ashland Light & Power and the Street Railway Company established the plant using small second-hand boilers and generators. When the two founding companies joined to become Lake Superior District Power (LSDP) in May 1922, the plant was equipped with five boilers and six turbine generators. Bay Front was acquired in 1983 by Northern States Power Company - Wisconsin as a result of a merger with LSDP.

In 1979 Bay Front became the first investor owned utility in the country to burn wood to generate electricity. It has consumed over 5.8 million tons of wood since that time. On average, Bay Front consumes about 250,000 tons of waste wood and railroad ties each year purchased from local loggers and other suppliers located within approximately 75 miles of the plant.

In the late 1980s Bay Front underwent a $15 million life extension project. During this, the original three turbines and two of the boilers were retired. Bay Front’s remaining boilers and turbine - generators are cross-connected so one boiler can power any unit. Because of its northern location, Bay Front runs not only to generate megawatts, but also to support the stability of Xcel Energy’s transmission system.

Since 1979, Bay Front has burned almost 4 million tons of waste wood and railroad ties, as well as other alternate fuels such as used tires.

During a major plant improvement project completed in 1991, Bay Front was equipped with an upgraded air quality control system, which includes two gravel bed filters. The gravel bed filters are designed to remove more than 98 percent of particulate matter. The system contains more than 300 tons of gravel bits, which are electrically charged to collect particulate from flue gas.

Plant employees serve as coaches, volunteer assistants and mentors for organizations such as Special Olympics, youth hockey, Boy Scouts and the Salvation Army. The plant is also represented annually in the community’s Relay for Life for the American Cancer Society. And it hosts tours for local schools, colleges and federal, state and community leaders.

Want to make a strong statement about energy efficiency? Consider whether your home might be a good candidate for a green roof, solar panels, or a geothermal system.