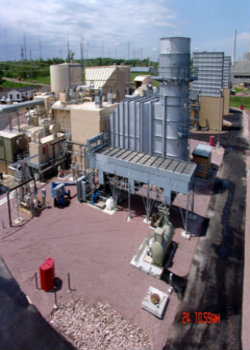 The Angus C. Anson Generating Station is named in honor of the late executive for Northern States Power Company, the predecessor of Xcel Energy, who died in a plane crash in April 1993.

Anson station was formally established in 1994 to provide additional peaking generation to the Sioux Falls area. The site previously was home to the Pathfinder plant, which was originally built as a pilot nuclear plant, a facility that laid the groundwork for the company's successful nuclear operations at Monticello and Prairie Island. Pathfinder later was converted to an oil and gas-fired peaking facility, which is no longer operating.

The Anson units are equipped with a demineralized water system that controls air emissions by injecting water into the combustion process. Unit 4 is also equipped with dry low NOx burners to reduce nitrogen oxide emissions.