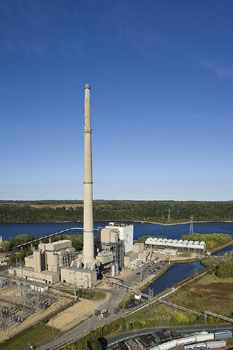 The plant was named in honor of Allen S. King, former president and chairman of Northern States Power Company (NSP), a predecessor to Xcel Energy.

King plant underwent a significant rehabilitation from 2004-2007 as part of Xcel Energy’s Metro Emissions Reduction Project. The improvements were targeted at significantly reducing air emissions and restoring the King unit to its original electricity output capacity, while extending the life of the plant.

The plant’s cyclone boiler burns up to 300 tons of coal an hour – about 2 ½ railroad carloads. A mile long, 600 ton-per-hour-capacity conveyor system several stories high, moves fuel from the coal yard to hoppers in the main building.

King plant continues to work with industry peers, original equipment manufacturers, and others to stay abreast of state of the art techniques and equipment.

King plant also was the model for a successful and growing peregrine falcon restoration effort, as the first plant in the nation to place a falcon nest box on its stacks. Several other Xcel Energy plants have joined the effort, along with other generating facilities worldwide.

King employees are involved in United Way, Adopt a Family and Habitat for Humanity.