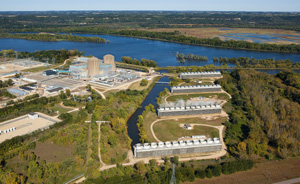 The two pressurized water reactors at the Prairie Island facility generate about 20 percent of the electricity used by Xcel Energy’s customers in the Upper Midwest. The plant is about 40 miles southeast of Minneapolis-St. Paul and about five miles north of Red Wing, MN. Each reactor can generate about 550 megawatts of electricity, for total plant output of about 1,100 megawatts, enough to power  about 1 million homes.

Each reactor core holds 121 fuel assemblies and is about 13-feet long in a square array. Each unit is shut down for refueling and maintenance about once every 18 months, and about 40 percent of the fuel assemblies are replaced.

When removed from the reactor, used fuel is stored in a pool inside the plant until it has cooled enough to be safely stored in steel containers called casks. It is then moved to reinforced concrete pads in an on-site dry storage facility.

The Unit 1 reactor began operating in December 1973 and the Unit 2 reactor in December 1974. The Nuclear Regulatory Commission first licensed the reactors for 40 years of operation and extended those licenses for an additional 20 years, until 2033 and 2034.

Prairie Island is among Xcel Energy’s lowest-cost sources of generation on a per megawatt-hour basis, and it does not produce any greenhouse gas emissions. The plant runs essentially 24 hours a day, seven days per week, except during refueling outages, which occur approximately every 18 months and last about four to six weeks.